The fatal flaw of prescription drugs

Drugs comprise the major treatment modality of scientific medicine. A recent article in the New York Times revealed that over half of Americans regularly take prescription drugs for chronic health problems. Sadly, many people don’t realize that the drugs they’re taking could be making their condition worse.

Most drugs don’t cure illness. They just suppress symptoms. Unfortunately, drugs also suppress functions. Though drugs provide symptom relief in the short term, over time they may worsen the underlying condition because they interfere with our body’s self-healing mechanisms. For example, many people take ibuprofen or other non-steroidal anti-inflammatory drugs (NSAIDs) to cope with arthritis and inflammatory conditions. While NSAIDs are effective in reducing pain and inflammation in the short-term, they are also known to reduce blood flow to cartilage. Since blood carries all of the nutrients and immune substance necessary for tissue repair, NSAIDs can actually worsen the original problem when taken chronically.

The second problem is that, by definition, drugs correct a specific imbalance by causing at least one other and often several other imbalances. When a drug is introduced into the body to address a malfunction in one biochemical pathway, that drug inevitably interacts with many other pathways.

The mapping of these pathways in recent genetic research underscores the danger of pharmaceutical drugs. The diagram below shows the interactions among a small set of cellular proteins found in a fruit fly. Proteins encased in ovals are grouped according to specific pathway functions. Connecting lines indicate protein-protein interactions. Protein interconnections among the different pathways reveal how interfering with one protein may produce profound “side effects” upon other related pathways.1 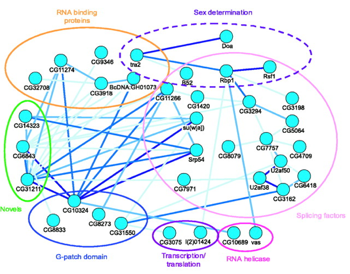 Complicating the phenomenon of so-called “side effects” is that biological systems are redundant. The same protein molecule may be used in several different systems of the body, but it has a completely different function in each of them.

One of the most amazing features of the body’s signaling system is its specificity. When you have a poison oak rash on your arm, histamine is released in that specific area only to activate an inflammatory response to the allergen. Likewise, if you’re under significant stress, histamine is released only in the brain to enhance the function of neurons.

Unfortunately, pharmaceutical drugs have no such specificity. When you take an antihistamine to deal with the itchiness of an allergic rash, the drug is distributed systemically. It affects histamine receptors wherever they are located throughout the whole body. So, while the antihistamine will curb the blood vessels’ inflammatory response and reduce the allergic symptoms of the rash, it will also enter the brain and affect nerve function – which causes drowsiness.

The recent hormone replacement therapy (HRT) debacle is a tragic example of the inherent risks of pharmaceutical drugs.  Estrogen is best known for its function on the female reproductive system.  However, more recent studies have shown that estrogen also plays an important role in the normal function of blood vessels, the heart and the brain.  That ‘s why synthetic estrogen hormones that were prescribed to alleviate menopausal symptoms ended up causing cardiovascular disease and neural dysfunctions such as strokes.

No matter how “targeted” drugs are, they are still relatively crude, blunt instruments when compared to the body’s highly sophisticated immune system. Prescription drugs are are much more like sledgehammers or shotguns than the “magic bullets” they are made out to be.

In the next article, we’ll take a closer look at the consequences of side effects caused by prescription drugs. Until then, I welcome your questions and comments!

Bad Behavior has blocked 928 access attempts in the last 7 days.