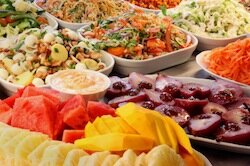 You’ve probably noticed that I haven’t been able to write as much lately for the blog. I’ve been incredibly busy with my private practice, launching the Paleo Detox program, preparing and delivering talks locally, developing new content like ongoing class series and an eBook, and of course continuing my research on various topics.

I’ve got one more article to write for the series on diabesity. I’ll discuss what I believe to be the most effective form of exercise for restoring glucose tolerance and insulin sensitivity. I hope to get to that this weekend.

After that, I’ll be sending out a survey to get your input on the next series, as well as several other topics related to the blog and various projects I’ve got in the works.

I hope to get back to a more regular writing schedule at some point, but with everything going on it may take a while. In the meantime, I may try out some new formats, like posting a brief summary of articles from around the web that I’ve found interesting during the week.

Here are a few from this week.

Why Is My Cholesterol So High On This Diet?

In this article, Chris Masterjohn explains why some people see their cholesterol go up (often temporarily) when they switch to a nutrient-dense, whole-foods based diet. His theory, which is plausible from a physiological standpoint, is that the temporary cholesterol elevation is occurs because these folks are curing themselves of fatty liver disease.

In any event, we know that total and LDL cholesterol are weakly correlated with heart disease, so I’m never concerned when I see people’s cholesterol go up on a paleo or nutrient-dense diet. It’s expected. Especially when their HDL goes up and their triglycerides go down, which is the typical response.

Throughout my series on diabesity, I’ve presented evidence that blood sugar levels considered to be “normal” by mainstream standards are anything but, and that they can lead to complications like retinopathy and peripheral neuropathy.

Jenny Ruhl blogged today about a recently published meta-analysis that confirms this once again. In the study, blood sugar levels of 117 mg/dL or above, and an A1c of 6.3 or above (both below current limits) significantly increased the risk of retinopathy. But, as Jenny points out, the safe limits are lower still, because retinopathy is one of the last complications of diabetes to appear. Heart disease risk increases as post-meal blood sugars rise above 155 mg/dL, and increases in a straight line with A1c above 4.7, becoming quite significant as it rises above 6.

Grasse Based Health: Food For Thought

In this video, Peter Ballerstedt argues that animal protein and animal fat are not only superior to grains for human health, but also more sustainable from an agricultural and ecological perspective.

The presentation is quite dry, but the information is solid and it’s definitely worth watching.

Bad Behavior has blocked 754 access attempts in the last 7 days.