When it comes to fish oil, more is not better 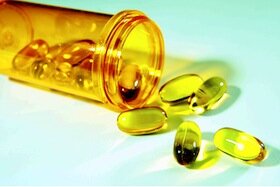 A new study was recently published showing that 3g/d of fish oil in patients with metabolic syndrome increased LDL levels and insulin resistance.

Unfortunately, I don’t read Portuguese so I can’t review the full-text. But this study isn’t alone in highlighting the potential risks of high-dose fish oil supplementation. Chris Masterjohn’s latest article on essential fatty acids, Precious yet Perilous, makes a compelling argument that fish oil supplementation – especially over the long-term – is not only not beneficial, but may be harmful.

This may come as a surprise to you, with all of the current media hoopla about the benefits of fish oil supplementation. Yet the vast majority of the studies done that have shown a benefit have been short-term, lasting less than one year. The only trial lasting more than four years, the DART 2 trial, showed that fish oil capsules actually increase the risk of heart disease and sudden death.

A 2004 Cochrane meta-analysis of trials lasting longer than six months suggests that the cardiovascular benefits of fish oil have been dramatically over-stated. They analyzed 79 trials overall, and pooled data from 48 trials that met their criteria. The only effect that could be distinguished from chance was a reduced risk of heart failure. Fish oil provided no reduction in total or cardiovascular mortality.

Too much fish oil can wreak havoc in your body

Omega-3 fatty acids are highly vulnerable to oxidative damage. When fat particles oxidize, they break down into smaller compounds, like malondialdehyde (MDA), that are dangerous because they damage proteins, DNA, and other important cellular structures.

A study by Mata et al demonstrated that oxidative damage increases as intake of omega-3 fat increases. The results of this study were summarized in the Perfect Health Diet, by Paul and Shou-Ching Jaminet:

Notice the clear increase in TBARS (a measure of oxidative damage of the LDL particle) with omega-3 fat. It’s important to note that this was only a 5-week trial. If it had gone on for longer than that, it’s likely the oxidative damage caused by omega-3 fats would have been even worse. This isn’t surprising if you understand the chemical composition of fats. Polyunsaturated fats (PUFA) are highly vulnerable to oxidative damage because they’re the only fatty acids that have two or more double bonds, and it’s the carbon that lies between the double bonds that is vulnerable to oxidation (as shown in the figure below):

Another thing worth noting, if you haven’t already, is that intake of saturated and monounsaturated fats does not increase oxidative damage by a significant amount. This is illustrated in both the table and the diagram above: saturated fats have no double bonds, which means they are well protected against oxidation. MUFA is slightly more vulnerable, since it does have one double bond, but not nearly as much as PUFA which has several double-bonds.

A randomized, double blind, placebo-controlled trial likewise showed that 6 grams per day of fish oil increased lipid peroxides and MDA in healthy men, regardless of whether they were supplemented with 900 IU of vitamin E. And consumption of fresh, non-oxidized DHA and EPA has been shown to increase markers of oxidative stress in rats.

Fish oil not as beneficial as commonly believed

But the effect seen in this review was mostly due to the GISSI and DART-1 trials. They found that fish oil may prevent arrhythmia in patients with chronic heart failure and patients who have recently survived a heart attack.

However, there is no evidence that people other than those with arrhythmia and chronic heart failure benefit from taking fish oil or that doses higher than one gram of omega-3 fatty acids per day provide any benefit over smaller doses. And then there’s the rather disturbing result of the DART-2 trial, the only fish oil study lasting more than four years, showing an increase in heart disease and sudden death.

It’s logical to assume the effects of oxidative damage would take a while to manifest, and would increase as time goes on. That’s likely the reason we see some benefit in short- and intermediate-term studies (as n-3 displace n-6 in the tissues), but a declining and even opposite effect in the longer-term DART-2 trial (as increased total PUFA intake causes more oxidative damage).

The danger of reductionist thinking in nutritional research

The current fish oil craze highlights the danger of isolated nutrient studies, which unfortunately is the focus of nutritional research today. Kuipers et al. eloquently described the risks of this approach in a recent paper:

The fish oil fatty acids EPA and DHA (and their derivatives), vitamin D (1,25-dihydroxyvitamin D) and vitamin A (retinoic acid) are examples of nutrients that act in concert, while each of these has multiple actions(7,8).

Consequently, the criteria for establishing optimum nutrient intakes via randomised controlled trials (RCT) with single nutrients at a given dose and with a single end point have serious limitations. They are usually based upon poorly researched dose–response relationships, and typically ignore many possible nutrient interactions and metabolic interrelationships.

For instance, the adequate intake of linoleic acid (LA) to prevent LA deficiency depends on the concurrent intakes of α-linolenic acid (ALA), γ-LA and arachidonic acid (AA). Consequently, the nutritional balance on which our genome evolved is virtually impossible to determine using the reigning paradigm of ‘evidence-based medicine’ with RCT.

Interest in fish oil supplementation started with observations that the Inuit had almost no heart disease. It was assumed their high intake of marine oils produced this benefit. While this may be true, at least in part, what was overlooked is that the Inuit don’t consume marine oils in isolation. They eat them as part of a whole-food diet that also includes other nutrients which may help prevent the oxidative damage that otherwise occurs with such a high intake of fragile, n-3 PUFA.

It’s also important to note that there are many other traditional peoples, such as the Masai, the Tokelau, and the Kitavans, that are virtually free of heart disease but do not consume high amounts of marine oils. What these diets all share in common is not a large intake of omega-3 fats, but instead a complete absence of modern, refined foods.

That is why the best approach is to dramatically reduce intake of omega-6 fat, found in industrial seed oils and processed and refined foods, and then eat a nutrient-dense, whole-foods based diet that includes fatty fish, shellfish and organ meats. This mimics our ancestral diet and is the safest and most sane approach to meeting our omega-3 needs – which as Chris Masterjohn points out, are much lower than commonly assumed.

Some may ask why I continue to recommend fermented cod liver oil (FCLO), in light of everything I’ve shared in this article. There are a few reasons. First, I view FCLO as primarily a source of fat-soluble vitamins (A, D, K2 and E) – not EPA and DHA. Second, in the context of a nutrient-dense diet that excludes industrial seed oils and refined sugar, and is adequate in vitamin B6, biotin, calcium, magnesium and arachidonic acid, the risk of oxidative damage that may occur with 1g/d of cod liver oils is outweighed by the benefits of the fat-soluble vitamins.

So I still recommend eating fatty fish a couple times per week, and taking cod liver oil daily, presuming your diet is as I described above. What I don’t endorse is taking several grams per day of fish oil, especially for an extended period of time. Unfortunately this advice is becoming more and more common in the nutrition world.

More is not always better, despite our tendency to believe it is.

Note: As always, I’m open to discussion and dissenting views. But please don’t link to short-term studies on the efficacy of fish oil, because as I’ve explained in this article, it’s the long-term effects that we’re primarily concerned with. I’d be interested in seeing any studies longer than 2 years showing that 1) fish oil benefits extend beyond reducing arrhythmia in patients with chronic heart failure and patients who have recently survived a heart attack, 2) doses higher than 1g/d produce a larger benefit than doses of 1g/d, and (most importantly) 3) doses of >1g/d or higher do not increase the risk of heart disease or death

Bad Behavior has blocked 941 access attempts in the last 7 days.