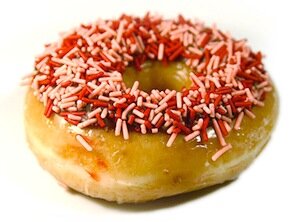 So far in this series we’ve focused on a new way of understanding diabesity as an autoimmune, inflammatory disorder, and we’ve looked in a general way at the underlying mechanisms (inflammation, genetics, environmental triggers and leaky gut) that contribute to diabesity.

Now that we’ve laid that foundation, we’re going to take a closer look at some of those mechanisms. In this article, we’ll discuss the three major dietary toxins that trigger diabesity:

At the simplest level, a toxin is something capable of causing disease or damaging tissue when it enters the body. When most people hear the word “toxin”, they think of chemicals like pesticides, heavy metals or other industrial pollutants. But even beneficial nutrients like water, which are necessary to sustain life, are toxic at high doses.

It implies that the first bit eaten of any toxin has low toxicity. Each additional bit is slightly more toxic than the bit before. At higher doses, the toxicity of each bit continues to increase, so that the toxin is increasingly poisonous.

This is important to understand as we discuss the role of each of the dietary toxins listed above in contributing to diabesity. Most of you won’t develop diabesity by eating a small amount of fructose, cereal grains and even industrial seed oils. But if you eat those nutrients (or rather anti-nutrients) in excessive quantities, your risk of diabesity rises significantly. This is especially true if you have any of the genes that predispose you to diabetes and obesity.

The primary effect toxins have on the body – whether dietary or otherwise – is inflammation. And since we now know that diabesity is an autoimmune, inflammatory disease, it’s clear that anything that causes inflammation is a potential risk factor for both diabetes and obesity.

The impact of each of these dietary toxins could fill a book. And in fact, there are several such books and many other blogs that have covered this material in detail. Rather than re-create the wheel, I’m going to provide a brief summary and then link you to resources if you want more detail.

Cereal grains: the unhealthiest “health food” on the planet?

The major cereal grains – wheat, corn, rice, barley, sorghum, oats, rye and millet – have become the staple crops of the modern human diet. They’ve also become the “poster children” of the low-fat, high-carbohydrate diet promoted by organizations like the American Heart Association (AHA) and American Diabetes Association (ADA). If you say the phrase “whole grains” to most people, the first word that probably comes to their mind is “healthy”.

But the fact is that most animals, including our closest relative (the chimpanzee) aren’t adapted to eating cereal grains and don’t eat them in large quantities. And humans have only been eating them for the past 10,000 years (a tiny blip of time on the scale of evolution). Why?

Because plants like cereal grains are always competing against predators (like us) for survival. Unlike animals, plants can’t run away from us when we decide to eat them. They had to evolve other mechanisms for protecting themselves. These include:

One of these toxic compounds is the protein gluten, which is present in wheat and many of the other most commonly eaten cereal grains. In short, gluten damages the intestine and makes it leaky. As we saw in the last article, a leaky gut is one of the major predisposing factors for diabetes and obesity.

Celiac disease – a condition of severe gluten intolerance – has been well known for decades. These people have a dramatic and, in some cases, potentially fatal immune response to even the smallest amounts of gluten. However, what is less well known is that wheat gluten triggers an immune response and gut inflammation in almost everyone – regardless of whether they are “gluten intolerant” or not. Over 80% of the population develops measurable gut inflammation after eating wheat gluten.

Industrial seed oils (corn, cottonseed, soybean, safflower, sunflower, etc.) have not been a part of the human diet up until relatively recently, when misguided groups like the AHA and the ADA started promoting them as “heart-healthy” alternatives to saturated fat.

The graph below shows how dramatically seed oil consumption has risen over the past several decades: 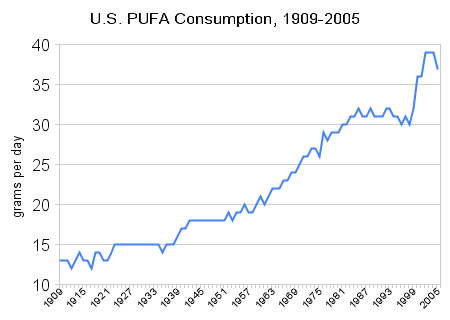 Industrial seed oils are extremely harmful when consumed in excess. I’ve written about this at length in my series on essential fatty acids. In the context of this article, researchers have shown that industrial seed oils have played a significant role in the current obesity epidemic.

A recent study showed that a diet with an omega-6:3 ratio of 28 (meaning 28 times more omega-6 than omega-3 fats) caused obesity that progressively increased over four generations of mice. This means that eating too much omega-6 didn’t only cause obesity in the current generation, but it also predisposed future generations eating the same diet to developing obesity.

This is bad news for those eating a Standard American Diet, which contains an omega-6:3 ratio that is very similar to what the mice in the study above were fed.

Omega-6 seed oils have also been shown to cause inflammation, insulin resistance and impaired leptin signaling, all of which directly contribute to diabetes.

Finally, industrial seed oils have been shown to interfere with thyroid function by blocking the binding of thyroid hormone to its receptors. The result is a higher fat mass and a less efficient metabolism.

For more information on how seed oils contribute to diabesity, see The Body Fat Setpoint, Part III: Dietary Causes of Obesity, Have Seed Oils Caused a Multi-Generational Obesity Epidemic?, and my series on Essential Fatty Acids.

Fructose: the sweetest way to get diabesity

White table sugar is composed of two sugars: glucose and fructose. Glucose is an important nutrient in our bodies and is healthy, as long as it’s consumed in moderation. Fructose is a different story.

Fructose is found primarily in fruits and vegetables, and sweeteners like sugar and high-fructose corn syrup (HFCS). A recent USDA report found that the average American eats 152 pounds of sugar each year, including almost 64 pounds of HFCS.

Unlike glucose, which is rapidly absorbed into the bloodstream and taken up by the cells, fructose is shunted directly to the liver where it is converted to fat. Excess fructose consumption causes a condition called non-alcoholic fatty liver disease (NAFLD), which is directly linked to both diabetes and obesity.

A 2009 study showed that shifting 25% of dietary calories from glucose to fructose caused a 4-fold increase in abdominal fat. Abdominal fat is an independent predictor of insulin sensitivity, impaired glucose tolerance, high blood pressure and high cholesterol and triglycerides.

In a widely popular talk on YouTube, Dr. Robert H. Lustig explains that fructose has all of the qualities of a poison. It causes damage, provides no benefit and is sent directly to the liver to be detoxified so that it doesn’t harm the body.

Another danger of fructose is that it reacts with polyunsaturated fats and proteins to form toxic compounds called Advanced Glycation End-Products (AGEs) in a process known as “fructation”. (Who comes up with these words?) AGEs wreak all kinds of havoc on the body; they damage DNA, speed up the aging process and cause high blood pressure and kidney disease. And studies have shown that fructose is up to 10 times more likely to produce AGEs than glucose.

For more on the toxic effects of fructose, see The Perfect Health Diet and Robert Lustig’s YouTube talk: Sugar, The Bitter Truth.

A toxin-free diet prevents and even reverses diabetes

In addition to all of the evidence above, we have two other lines of evidence that strongly indicate that cereal grains, seed oils and fructose contribute to diabesity.

First, diabesity is either non-existent or extremely rare in hunter-gatherer cultures that don’t consume these toxic foods.

The first study, performed by Dr. Staffan Lindeberg and colleagues, found that a paleolithic diet was superior to the mediterranean diet in several ways. These are summarized in Stephan Guyenet’s article on Lindeberg’s study:

Dr. Lindeberg published a follow-up study in 2009. In this case they compared a paleolithic diet with a conventional ADA low-fat “diabetes diet”. While the results weren’t quite as impressive as the first one, they were still very encouraging. Participants in the paleolithic group:

At the end of the trial, 8 out of 13 patents still had diabetic blood glucose levels. However, in this study the patients had well-established diabetes for an average of 9 years. Over time diabetes progresses to beta cell destruction, which reduces insulin output. Once this point has been reached, dietary changes can be helpful but cannot completely reverse diabetes.

What this means, of course, is that the earlier you remove these toxins from your diet, the better chance you have of preventing and even reversing diabesity. And while a paleolithic diet may not reverse diabetes in those that have had it for several years, it still produces significant improvements.

** A donut is the perfect diabesity food. It’s got refined flour (cereal grains), industrial seed oils (plus trans fats for an added bonus), and plenty of high-fructose corn syrup.

Bad Behavior has blocked 919 access attempts in the last 7 days.