Is Paleo even Paleo? And does it even matter? 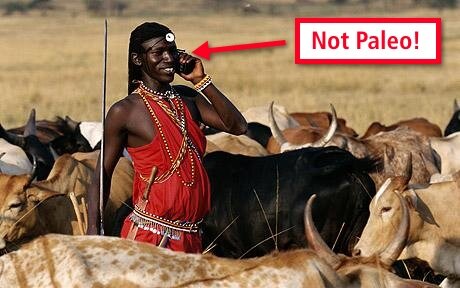 I was happy to see a new blog post by Kurt Harris over at PaleoNu yesterday. He’s one of my favorite bloggers, and he hasn’t written much over the last several months. Turns out he’s been boning up on evolutionary biology and paleoanthropology to determine what is currently knowable – and unknowable – about how our paleolithic ancestors lived and ate.

He has also been cultivating a relationship with a PaleoNu reader who happens to be a tutor in Zoology at an “institute of prominence” in the UK, with over 20 years of research and teaching in this field behind him. Preferring to remain anonymous, this fellow will be writing occasional guest articles under the pen name “Professor Gumby” (love it).

So what did Professor Gumby and Dr. Harris have to say in this first collaboration? In short:

This last point is particularly salient. We can’t determine the optimal diet of a particular group of people simply by observing what they currently eat. As Dr. Harris points out:

It should be instructive to ask apparently healthy HGs what they prefer to eat in addition to what they have to eat. In a population that is healthy and not conditioned to a lifetime of non-foods as in the diet of a westerner with metabolic syndrome, it may have meaning to know what they prefer to eat. Not accounting for costs, how would they apportion their caloric intake from their extant food sources? I see no reason that relative food preferences could not be genetically or epigenetically influenced in addition to culturally influenced. Absent the interference of modern medicine, could a preference for the foods that make one live a healthier, more robust life be selected for and rapidly move through a population in a few generations? Do the Kitavans actually prefer yams/sweet potatoes/cassava over coconut and fish in the same ratio as the proportions they eat them in? Would Inuit happily prefer half their calories as sweet potatoes if they grew in the arctic? Or does each dietary pattern just reflect the preference to avoid starvation?

What we don’t know about paleo

The takeaway is simply this: it’s impossible to know for certain what our paleolithic ancestors ate by studying modern HG people. It’s difficult even to know what modern HG people eat when a bunch of researchers aren’t hanging around watching them.

There’s been a lot of discussion in the “paleo-sphere” about this lately. It comes up every time a fossil study is reported on, such as the most recent one that found starch on the teeth of Neaderthals, suggesting that they may have – gasp! – eaten grains on occasion. Of course these stories are pounced on by the anti-paleo set as evidence that grains have been a regular part of our diet for a long time and that proponents of the paleo diet don’t know what they’re talking about.

So on the one hand you’ve got paleo fundamentalists claiming to know exactly what paleolithic people ate, and stating with apparent certainty that grains and legumes were absolutely not included in their diets. Then you’ve got folks on the other end of the spectrum who claim that paleo is a just another “fad diet”, like the Zone or Atkins, with absolutely no basis in clinical or anthropological evidence.

They’re both wrong, of course.

It should be abundantly clear that we can’t know for certain what paleo people ate. They lived a long time ago, and we don’t have a time machine. Even if we did, and went back to study them, they’d probably pull the equivalent of me eating spinach when that special guest visited.

But this doesn’t mean we simply disregard what we do know about our paleolithic ancestors and modern HGs, nor does it mean that we can’t extrapolate that knowledge into helpful guidelines for what a species-appropriate diet might be for us humans.

What we do know about paleo

We still know, for example, that modern diseases like diabetes, obesity, cancer, autoimmunity and heart disease were rare (or even nonexistent) in paleo people and are still rare in the few HG groups around the world that have been lucky enough to preserve their traditional diet and lifestyle.

We also know that when modern foods like wheat flour, industrial seed oils and sugar are introduced in these populations, the incidence of modern diseases goes up commensurately. And, even more telling, when these groups return to their traditional ways, the modern diseases disappear again. This suggests that it wasn’t some genetic vulnerability that caused them to develop modern diseases with the introduction of modern foods.

So yes, paleo may not actually be paleo. We will probably never know exactly what our paleo relatives ate.

My response to that? I couldn’t care less.

Why? Because we know enough about ancestral diets in a general sense to suggest that they are superior to modern diets for human health. And we know enough – thanks to current clinical research – about modern foods like flour, seed oils and sugar to know that we shouldn’t be eating them.

That’s enough for me.

I really wish there was a word (other than paleo) I could use to describe a nutrient-dense, toxin-free, whole-foods based diet. Because that’s kind of a mouthful, and it leaves a lot open to interpretation. A raw-food vegan could hear me say that and think I’m talking about their diet. I’m not.

So I go on using the term “paleo” to loosely refer to a diet that emphasizes animal protein and fats, starchy & non-starchy vegetables, fermented foods, raw dairy (when tolerated) and fruit, nuts & seeds (in moderation).

I wish there was another term I could use that didn’t evoke a quasi-religious debate. But I don’t know of one, so for now, I guess I’ll just have to deal with all of the baggage that comes with “paleo”.

Bad Behavior has blocked 666 access attempts in the last 7 days.