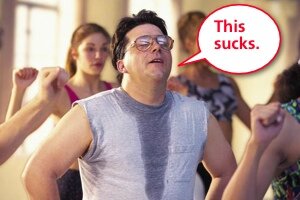 I believe regular movement and exercise is essential to health. As Stephan Guyenet pointed out in a recent blog post, our paleolithic ancestors had a different word for exercise: “life“. They naturally spent a lot of time outdoors in the sun, walking, hunting, gathering, and performing various other physically-oriented tasks. They had no concept of this as “exercise” or “working out”. It was just life.

How could this be? There are three main reasons:

In an example of the first reason, a study following women over a one-year period found that in order to lose one kilogram (2.2 pounds) of fat, they had to exercise for an average of 77 hours. That’s a lot of time on the treadmill just to lose 2 pounds!

In an example of the second reason, a study found that people who exercise tend to eat more afterwards, and that they tend to crave high-calorie foods. The title of this study says it all: “Acute compensatory eating following exercise is associated with implicit hedonic wanting for food.” I love it when researchers have a sense of humor.

In an example of the third reason, one study assigned 34 overweight and obese women to an exercise program for 8 weeks. Fat loss at the end of the study was an average of 0.0kg. Not very impressive. But the researchers noticed that some women did lose weight, while others actually gained. What was the difference? In the women that didn’t lose weight, the increase in specific periods of exercise corresponded with a decrease in overall energy expenditure. Translation: they were more likely to be couch potatoes when they weren’t exercising, which negated the calorie-burning effect of their workouts.

If you’re still not convinced, the Cochrane group did a review of 43 individual studies on exercise for weight loss. Study length ranged from 3 to 12 months, and exercise sessions lasted on average 45 minutes with a frequency of 3-5 times per week. The results? On average, the additional weight loss from exercise averaged about 1 kg (2.2 pounds). Meh. Assuming they worked out for 45 minutes 4x/wk over 6 months, that means they had to exercise 69 hours to lose that 1 kg.

The purpose of this rather long introduction is simply to point out that low-intensity, “cardio” exercise is spectacularly ineffective for weight loss. But that doesn’t meal all types of exercise aren’t effective.

HIIT is a type of exercise performed in short bursts (intervals) at high-intensity. Several studies have been done comparing HIIT to low-intensity, steady-state (“chronic cardio”, as Mark Sisson calls it) exercise, and HIIT has been shown to be superior in nearly every meaningful marker.

A pair of studies done at McMaster University found that “6-minutes of pure, hard exercise once a week could be just as effective as an hour of daily moderate activity“, according to the June 6, 2005 CNN article reporting on the study.

The study itself was published in the Journal of Applied Physiology, and it revealed that HIIT resulted in unique changes in skeletal muscle and endurance capacity that were previously believed to require hours of exercise each week.

A follow-up study confirmed the results. Despite the fact that the more conventional endurance exercise group spent 97.5 percent more time engaged in exercise, both groups of subjects improved to the same degree. The group that exercised 97.5 percent more received no additional benefit whatsoever from doing so. Considering the wear-and-tear and increased risk of injury associated with that much more exercise, there’s absolutely no point to doing “chronic cardio” when you can receive the same benefits with a fraction of the time and risk by doing HIIT.

Why high-intensity exercise is better 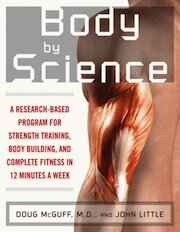 In his excellent book on high-intensity strength training, Body By Science, Dr. Doug McGuff explains that high-intensity training is superior to chronic cardio because it produces a greater stimulus and thus more effectively empties the muscles and liver of glucose. This stimulus can last several days with HIIT, as opposed to just a few hours with low-intensity training.

HIIT also activates hormone-sensitive lipase (HSL), which mobilizes fatty acids for energy use. This means that during HIIT, both glucose and fatty acids will be burned, leading to greater fat loss and restoration of insulin sensitivity.

High-intensity strength training: best of all?

This is, in fact, the method of training I’ve been doing since April of this year. I admit I was somewhat skeptical about it all before I read Body By Science. But the research and the physiology was convincing, so I decided to give it a try.

The results have been incredible. My workout varies in length between 5 and 9 minutes a week. That’s right, I said minutes. With only a few exceptions, I’ve increased the amount of weight I can lift, the time I can lift it, or both, with each successive workout. My strength has increased and my physique is, if anything, better than it was when I was lifting 3x/week for much longer periods. 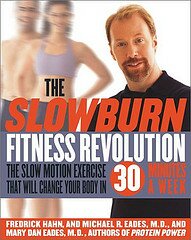 Aside from the Body By Science (BBS) weight workout which I perform once a week, I stay active on a daily basis. I ride my bike or walk to work or to do errands, and rarely drive my car. I go on walks in the woods or on the beach. I surf when time permits. But I don’t do anything else for “exercise”. This routine not only feels great, it fits very well with my lifestyle and it is completely sustainable. It doesn’t feel like an effort at all.

If you’re interested in this kind of training, I’d recommend picking up a copy of Body By Science and checking out their excellent blog. You can post your weekly workout results and get help and suggestions from the very knowledgeable community there – including both authors of the book, Doug McGuff & John Little, and other experienced trainers and enthusiasts.

Another option that may be more accessible for some is Fred Hahn’s The Slow Burn Fitness Revolution. Fred also has a website and blog worth checking out.

Final note to slackers: the popular excuse of “I don’t have time to exercise” is no longer valid. You’ve got 6 minutes a week to do this. I know you do.

Bad Behavior has blocked 759 access attempts in the last 7 days.