Antidepressants not as effective as research suggests 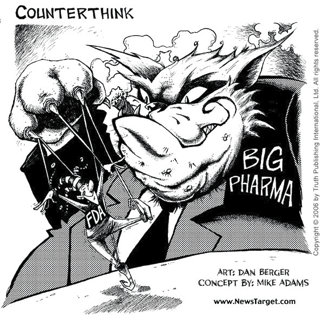 A new report due to be published in the May issue of the American Journal of Psychiatry shows that antidepressants aren’t all they’re cracked up to be.

But, faithful readers, you already knew that. Right?

The report is part of the National Institute of Mental Health-funded Sequenced Treatment Alternatives to Relieve Depression (STAR*D) project – the largest study of the treatment of depression conducted in the United States. It showed that findings from clinical studies used to gain FDA approval of antidepressants are not applicable to most patients with depression.

Researchers at the University of Pittsburgh Graduate School of Public Health compared symptoms and outcomes in depressed patients who met phase III study inclusion criteria to those who did not. Phase III studies for antidepressants determine the effectiveness of the drug in comparison to a placebo.

The inclusion criteria for these studies aren’t standardized or subject to any federal guidelines. Typically this means that patients with milder forms of depression, chronic depression, or other psychiatric or medical conditions in addition to short-term depression are excluded from studies.

In other words, the majority of “real world” patients with depression who end up taking antidepressants are excluded from clinical studies. It should be obvious why this is a problem. In a normal, clinical setting many patients with depression do also have other illnesses, such as diabetes, chronic fatigue syndrome or irritable bowel syndrome (IBS). It’s not unusual for them to have anxiety and insomnia, as well. In fact, it wouldn’t be presumptuous to expect that a depressed person might be suffering from a number of conditions that are either contributing to or caused by their illness.

Yet the only people that “qualify” for the clinical trials which determine whether antidepressants get approved by the FDA are those with short-term depression, no history of depression, no other psychiatric conditions such as anxiety, and no physical illnesses like heart disease or diabetes. This is the only subgroup of the general population for which we have any data on the efficacy of antidepressants.

By the same token, this means is that we have almost no clinical data on how antidepressants work for the “real world” patients who are most likely to be taking them. Indeed, after assessing 2,855 patients treated with citalopram (Celexa), the study authors found that fewer than one in four, or 22.2%, of the patients met the usual criteria for inclusion in phase III clinical trials.

According to study lead author, Stephen Wisniewski, Ph.D., professor of epidemiology and co-director of the Epidemiology Data Center, University of Pittsburgh Graduate School of Public Health, “This raises major concerns about whether results from traditional phase III studies can be generalized to most people with depression, who also often suffer from anxiety, substance abuse and other medical and psychiatric problems.”

When Wisniewski and his colleagues looked at the efficacy of antidepressants in those who did not meet phase III inclusion criteria – meaning the majority of people who take the drugs in real life – they found that their outcomes were much worse than those who did qualify for the trials. The depression remission rate in the patients who met the criteria was 34.4 percent, compared to only 24.7 percent in the ineligible group.

So, here’s the bottom line: antidepressants are nowhere near as effective as research suggests.

For more information on this topic, check out this index of my articles (as well as selected off-site resources) on depression and antidepressants.

thank you for your article,
My patients have a very hard time coming off antidepressants once  they have been taking them for a while, they obviously have some sort of effect on the patient’s mood. What do you suggest for those patients that  wish to get off their meds but cannot? Have they become somehow addicted to the placebo?
Justin

Your patients are suffering withdrawal symptoms that are a direct result of the biochemical changes in the brain caused by the antidepressant drugs.

For more information on why and how this happens, please read my post “The Dark Side of Antidepressants“.

The withdrawal process absolutely must be supervised by a licensed physician, preferably a psychiatrist who has a lot of experience titrating patients off of antidepressants. It can be potentially dangerous, so it is absolutely not something the patient should try to do on his/her own.  I can’t emphasize this enough.

Editor’s Note: As always, I strongly suggest that tapering of psychiatric meds be done under the supervision of a qualified, experienced psychiatrist or doctor. However, as AA points out, such a practitioner is not always available and many GPs do not have the necessary experience to guide a patient through this. I’ve decided to publish this comment for this reason. Please make every effort to find a doctor before trying this on your own.

This is a copy of a comment I made on the Furious Seasons Blog regarding tapering psych meds.  As an aside, I am not a medical professional.  However, I and many people in similar situations have found psychiatrists clueless about how to taper.

In my opinion, Chris’ advice about not doing things on your own is normally right on target.   But following your psychiatrist’s advice in tapering might be deadly as most of them do it way too fast.

“For those of you not familiar with my story, started tapering off of a 4 psych med cocktail in 2006. I am down to 1 med and expect to be off at the end of this year or in 2010.

With the exception of one med (Wellbutrin XL) which I essentially cold turkeyed, I have tapered the other meds at pretty much at 10% of current dose every 3 to 6 weeks. With Effexor and other drugs with a shorter half life, you may have to taper even more slowly. By the way, I wouldn’t recommend a cold turkey but I did an experiment with Wellbutrin XL using supplements to get off it quickly as my insurance coverage was running out. Fortunately, it worked.

Tapering slowly doesn’t mean that you won’t have withdrawal symptoms that can be incapacitating. But by tapering slowly, I have been able to have some semblance of a life which I doubt I would have had following tapering schedules that most medical professionals would force you into.

How to taper slowly:

For meds that can be crushed (check with pharmacist), buy a .001g scale on Ebay that runs between $15.00 and $30.00. Then go to a place like Vitacost and buy empty gelatin capsules. You also need a pill crusher.
Crush the pill you want to made the reduction from such as a 10mg pill. Put in capsule and weigh it. Take 90% of dose and that the new amount you need to take. Put excess in storage capsule that most pill crushers have to be used for a future measurement.
By the way, with these scales, you might want settle for a range such as .193 to .195 grams as it is hard to hit the right number exactly and it doesn’t seem to make a difference. Also, weigh it twice to make sure it is accurate.
For drugs like SSRIS, if you are at 10mg or under, using the liquid form is a great option as you can use a syringe to measure the amount. Here is a thread on the Paxil Progress Boards that might be helpful:
http://www.paxilprogress.org/forums/showthread.php?t=36443
Personally, I would be a klutz at this:)) but this option has worked well for people.
Another option is to use a compound pharmacist. They will make the doses you can’t get at your local CVS pharmacy. The downside is that not all insurance companies allow you to do this and you may have to pay up front and get reimbursement later. I did this with Wellbutrin XL by the way and it worked great. Here is a link to find a local one:
http://www.findings.net/sucompounding.html
For people on a drug like Pristiq or Effexor, normally, I am totally against doing this for various reasons but switching to Prozac might be the best option since it is an easier drug to taper logistically. Also, the long half life vs. the short half life of Effexor might make it easier to taper.
If that doesn’t work, using a compound pharmacy if it is financially feasible might work the best because of the difficulties in being able to customize the dose by yourself.”

Popping pills work only to stop the symptoms for a short period of time. When the effects wear of, the problem is still there. There are many different ways to deal with panic attacks. I have helped a lot of people already.

I would always recommend people to stay away from anti-depressants, there is more and more evidence that they are no more effective than placebos, and side effects, both short and long term can vary massively.